Did professional sports wake America up to COVID-19 reality? 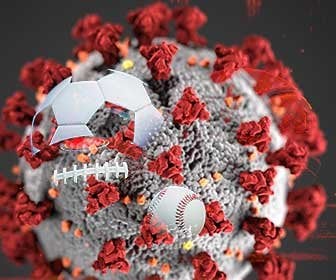 It feels like it happened a year ago but it was actually Wednesday, March 11. Rumors swirled around the internet regarding a handful of NBA games being played without fans. Preparations were in the works for NCAA Men’s Basketball conference tournaments and March Madness to do the same. That evening, the dominoes began to fall.

As Thursday morning came around, sports personalities made the call for leagues to suspend their seasons as well. Major League Soccer made the first move by suspending their season for 30 days. Minutes later, college basketball conference tournaments began to cancel their games. Auto races came next. The NHL suspended play of the hockey season shortly before Noon eastern time. Then the NCAA canceled both its women’s and men’s basketball tournaments.

By the time darkness had swept across much of the country, the upstart XFL canceled the remainder of their relaunched brand of football. Golf was the next victim as the PGA canceled their current tournament after finishing the first round.

On Friday, professional soccer across Europe – who had already been playing without fans present – suspended their season. Professional golf’s crown jewel, The Masters, was postponed. The Boston Marathon met the same fate. NASCAR and IndyCar canceled upcoming races.

It was the suspension of play in the NBA, though, that made more than a few Americans sit up and take notice. Coronavirus / COVID-19 was in America and the changes were happening – quickly. More than a few had the feeling in the back of their minds many weeks earlier as the virus was ravaging China that it was only a matter of time before the same thing happened stateside. I continue to think back to why the changes to our behavior – school closures, social distancing, aggressive hand washing, etc. – happened so suddenly.

Were Americans truly complacent feeling that “it can’t happen here”? In an era where everyone has their head turned down consuming a variety of information and messages on their phones, the information of what was due to happen in the United States was there. Why did it take the actions of a professional sports league to seemingly open the floodgates of behavioral change in America?

You will be able to leave a comment after signing in

Nobody has received reputation this week.